Upon or Apon: Meaning and Usage

You may read the word ‘apon’ in place of ‘upon’. There’s no difference in use and meaning, only in...

You may read the word ‘apon’ in place of ‘upon’. There’s no difference in use and meaning, only in spelling; the archaic form ‘apon’ is a word used in Middle English, an ancestor of today’s English language.

Here’s an example to show you both how ‘apon’ was used, and just how significantly the English language has changed since the Middle English era:

“hathel was apon a tre”

This could be translated as a man was on a tree, so you can see how many words weren’t to similar.

Harvard’s History of the English Language Workbook  outlines how spellings have changed from Middle to Modern English. According to their summary, Apon would have reflected a pronunciation like “opone”. There was much greater variation in Middle English spellings than those of Modern English (Present Day English), because spellings reflected pronunciation, so different dialects would write in different ways.

The Oxford English Dictionary , the principal historical dictionary of the English language, reveals that the origin of Upon is linked to the Old Norse “upp á”, which could in turn be related to the apon variation as the stress was placed on the “á”. There are many different ideas of where apon and upon come from, and it’s very likely that there were many different spellings, and even meanings, of the word when the preposition it was first being used.

Where do we use upon?

First things first, upon is a preposition. Maybe you recognize its components, “up” and “on”, which are also prepositions, and the foundation of the word. This preposition will need to precede noun phrases such as in “upon the hill” and “they’re upon us”, as well as some gerunds  (-ing verbs) which may need it: “upon learning the news”.

Besides where we use it grammatically, Upon features largely in writing and is considered to be quite formal. This could indeed be because it’s an old word, featured in lots of historical texts. One set expression which has survived through fairly tales and other short stories is the opener: “Once upon a time”.

Of its two preposition components, it’s used very similarly to “on”. On the other hand, “up” is used for direction and is not the same as Upon. We’ll return to this more later.

Why do we use upon?

The difference between the words “on” and Upon is quite subtle. The Cambridge Dictionary provides this example, an instance where upon cannot be replaced by “on”: Another few weeks and spring will be upon us.

Here, the phrase “be upon [something]” is used to explain that the Spring season is coming. It’s a set expression using upon and cannot be replaced by “on”.  The words also differ with regards to time.

The two examples show how similar the two are, but the second is an action completed and bound by time, so we say upon.  In the first example, we use “on” to talk about a general action which is unbound by time.

We also have the various ways that both on and upon are interchangeably used in Modern English.

As demonstrated in the image above, “on” is used for when an object rests above another, and we can say the preposition Upon here, too. We can also say “on” with the gerund structure that we’ve previously talked about, although Upon is preferred. Check out the following examples:

The OED attributes the choice of Upon over “on” to features such as rhythm and emphasis, which is to say that the way a sentence sounds is more important in determining which word we choose than any change in meaning.

Does upon mean before or after?

Finally, let’s see how upon is related to “before” and “after”. The preposition never signifies “before”, but upon means “immediately after” when used before a gerund, or -ing verb, as we’ve seen. Take a look at this sentence again, and how it is interpreted.

Upon hearing the news, the men ran out to the streets.

Once the men heard the news, they immediately ran onto the streets.

Hopefully this clears up the upon and apon confusion, and also gives you a better idea of where and why we say upon. 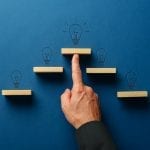 Ideas And Tips For Student Businesses In 2020: Creating A Legitimate Income For Yourself