What if the only barrier to blockchain adoption is education and knowledge?

Predominantly, the expertise and exposure to the blockchain industry remains concentrated amongst white males.

A survey by CoinDesk found that 90% of Bitcoin users are men. This is evident in the way the majority of the currency is controlled.

Crypto-whales hoard wealth with no incentive to contribute to the system’s accessibility by smaller traders. Unfortunately, this cultivates a lack of trust in a network that’s built for a decentralized economy, with the purpose of creating trust.

Bloomberg Businessweek reports about 1,000 users hold around 40% of all Bitcoin, giving these holders the ability to manipulate the digital pricing for their own gain.

So how can we create the mass adoption that is needed to make blockchain mainstream? For blockchain to work the way we envisage we run out all these scenarios – spreadsheets and number crunching – fantasizing about a world in which the crypto community achieves mass adoption.

The dream of a level playing field

Our dream is a level playing field, where millionaires and commoners can be equals, with an equal opportunity of rising up in the world, using this network for everything we need: banking, voting, music streaming, data sharing, healthcare and so on.

This dream has at its center a system that is seamless and simple, allowing the non tech man in the street to interact with and function with the technical overload of the current blockchain world.

The only way for us to achieve a blockchain enabled world is for mass awareness and adoption to take place so that we can set up sustainable systems.

So how do we simplify the learning process? How can the  tech-illiterate and cyberphobic  understand that this is something that will help them, not something to be feared?

Mass adoption should include all peoples and cultures, the marginalized and overlooked. How do we integrate blockchain into the daily life of disadvantaged populations — the disabled, low-income, elderly, and rural, groups that make up the majority of the population on earth?

Blockchain adoption is a cycle

Firstly, we need to create an increased awareness amongst these groups, with working examples that have seamless end-to-end experience for them, practical applications that are useful in their daily lives.

An example of this is the Kenyan base community currency Sarafu, that has seen huge growth during COVID-19. Sarafu is a B2B app for merchants and traders looking for an alternative to the existing process of procuring goods. The app brings transparency and efficiency to informal supply chains.

Second, we need to build trust which is quite a huge order considering corruption is ingrained in the system.

Traditional business owners have observed that mass market customers tend to not care specifically how the technology works and how it’s sized.  If they “get it” conceptually, or think they get it, this will be enough. How about for blockchain adoption? The same principle applies.

Enabling disenfranchised populations to engage with blockchain technology builds trust in the systems they use. Designing a trustworthy application can be instrumental two ways:

First, in reducing the stigmas, associations, and limitations of the blockchain ecosystem that cause adoption to fail for communities who could use it most.

Second, it extends credibility, creates familiarity with the users, and encourages the people less inclined to engage in a distributed ledger technology.

This will require a focus on the user experience to build trust-enabled transactions, like the one just described, to occur with ease for all sectors of the population.

Many skeptics are beginning to wonder if the “year of blockchain” will ever really arrive. Blockchain adoption in many countries continue to occur, although they are less frequent and happen with less fanfare than they did a few years ago.

Blockchain technology is projected to result in a radically different competitive future for the financial services industry, and in correlation, for the education industry.

We therefore concur, after observing developments on crypto and blockchain projects,

Any blockchain solution, no matter how prescient, is only as good as its execution. 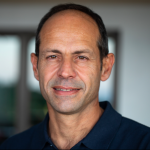 Mitch Rankin is the Co-Founder and CEO of English Forward, the internet's largest learn English Q&A and Community website, having served over 250+ million people. He is a family man, investor, and property professional, investing and working with development teams on mixed-use, commercial and hospitality property projects globally. He has a passion for education and blockchain, with his focus area on helping improve global communications through the EnglishForward.com platform.